A Gift for Daddy 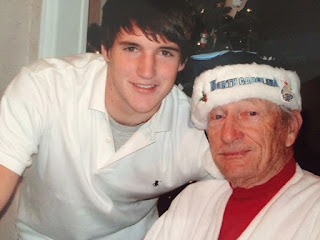 2014 had been a difficult year.  My 93 year old Father had experienced a year of failing health.  It felt like a slippery slope and no matter how we tried we couldn't find sure footing.  As the holidays approached we knew that this would be the last Christmas we had Daddy with us.  He was living in the nursing home now and wheelchair bound.  He couldn't manage his own body weight so standing was almost impossible.  The silver lining was that his mind was clear and he was alert.

My father had always been the life of the party.  With Santa hat on his head and harmonica in his hand he conducted the entire family party from Giving Thanks for our many blessings to holding the annual gift swap of white elephants! He was master of ceremonies.  He usually gave a short speech prior to the blessing on the importance of family and love, reminding us that all the gifts in the world couldn't replace the people and love that existing around that holiday table.

This year my Father was so frail we struggled.   How would he be able to attend the holiday party?  I must admit I was the one who was fearful that we wouldn't be able to manage getting him from the nursing home to my sister's house.  How would we get him into the car?  How would we get him in his wheelchair into the house?  How would our children (his grandchildren) respond to seeing their grandfather in such a frail state? Thankfully my sister was adamant,  Daddy would be at the holiday party!  I can still hear her voice, "if we can't manage getting him into the house with four strong grandson's then what good are we?"  The decision was made.

It wasn't easy but we bundled him up, got him into the car, and two of his four grandsons lifted the chair into the house like it was a feather.  My father's eyes literally glowed that night and I don't think the smile left his face the entire time.  Sitting there surrounding by the family that he and my mother had created with their love was the greatest gift we could have given him.  Even though the grandchildren are all in their 20's and 30's now, you would have thought that my Father was Santa himself as they gathered around him hugging, laughing and sharing stories of holidays past. 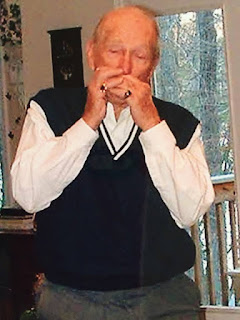 At the end of the night it was bittersweet as we got him safely into the car and two of his grandson's took him back to the nursing home. . My sister was so right!!  We would have this moment . He would have this moment.  Our family would make it a reality.  The memory of my Father's last Christmas is seared into my memory forever.

It was joyful, it was spiritual, it was and IS the true meaning of Christmas.

My friends at SHS Charlotte are a great resource: